LegalHandle
caring for the law since 2009

WRONGFUL TERMINATION LAWYER NEAR ME

A wrongful termination lawyer handles cases when an employer terminates the employment of a worker for an illegal reason, which includes: 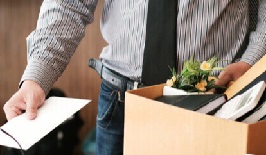 Do I have a case for wrongful termination?

If you can prove that your employer has illegally fired you, you may have a case and can sue for wrongful termination.

Before you talk to a wrongful termination lawyer you must gather all your employment documents and find out if you were an at-will employee. Write down the details of your termination, including any co-worker interviews. The attorney will then analyse your case and determine if any employment laws were broken. If so, you can file your claim.

Usually employees try to deal with employment matters on their own before involving an Employment Attorney.

What’s the time limit to file a lawsuit for wrongful termination?

you have the right to file a claim with the EEOC usually within 180 days after the termination. After filing the claim you will then receive a notice of right to sue. At that point, you will have 90 days to sue the employer.

What's the value of the average settlement of a wrongful termination case?

What are the largest wrongful termination lawsuits awarded or settled?

A California surgical physician’s assistant was awarded over $167 million. $3.5 million in past and future lost wages, nearly $40,000 for pain and suffering and $125 million for punitive damages. She was subject to physical and verbal sexual harassment, unwanted sexual advances, demeaning sexual comments, inappropriate physical contact, bullying, and later she added claims of whistleblower retaliation against the former employer.

A California woman sued her former employer for disability discrimination, failure to engage in the interactive process, failure to accommodate, wrongful termination and retaliation. She received $528k in economic damages, $4.7 million in non-economic damages, $16.5 in punitive damages. A total of $21.8 Million.

After protesting fraudulent and predatory sales practices, a $20 million verdict for wrongful termination was awarded to a timeshare sales representative.

A ruck driver who was fired after he denied driving in stormy conditions received $6.25 Million.

Employee terminated after learning and reporting about sexual harassment was awarded $4 Million.

Female employee of Fortune 500 company was awarded over $2.5 Million after being fired for having protested the use of homophobic statements and slurs in the workplace by senior company executives.

A disabled employee whose employment was terminated following a medical leave received a $1.1 Million settlement.

Employee who was injured at work was awarded a $587,500 settlement for disability, medical leave, and retaliation claims.

A 60-year-old employee of a major financial institution filed suit after he was denied the right to take time off to seek psychiatric care for depression. He received a $545,000 settlement for  failure to provide medical leave, disability discrimination (depression), failure to accommodate (provide time off work for hospitalization) and wrongful discharge.

A male field worker for a major energy company who protested the sexual harassment of female co-workers by supervisors received a $500,000 settlement for wrongful discharge and retaliation.

DISCLAIMER: LegalHandle.com provides internet content that is designed only to entertain and inform and is not to be considered professional law/legal advice. Consult a licensed attorney or law firm in your State of residence who will advise and answer all your questions and concerns about any legal issues you may have.